Billa is a 2009 IndianTelugu-language action thriller film directed by Meher Ramesh. The film stars Prabhas, Anushka Shetty and Namitha Vankawala.[2] The film, which began filming in October 2008, released in 3 April 2009.[3] It is a remake of the 2007 Tamil film of the same name which itself is a remake of the 1978 Hindi film Don. This is the second Telugu remake of the 1978 Hindi film Don after the 1979 film Yugandhar, starring NTR, the actress Jayasudha has a guest role as Janaki in this film, while in Yugandhar she played Anushka Shetty's role.

The movie begins with an underworld don Billa hiding and operating out of Malaysia hiding from Interpol's international criminal list. Krishnamoorthy, an ACP working for the interpol, has spent the last few years looking for Billa, leaving behind a life in India.

During a chase with the police, Billa is severely wounded after an accident, and dies in front of the ACP. The ACP then secretly holds a funeral for Billa. Interpol Officer Dharmendra is assigned to work with the ACP to capture the elusive Billa as no-one knows of Billa's death. The ACP keeps the death of Billa as a secret even from his fellow officers, and tracks down a look-alike called Swami Ranga, a petty thief based in Visakhapatnam. He asks Ranga to infiltrate Billa's gang by pretending to be Billa. In return he will make sure that the children Ranga adopted, Lakshmi and Sreenu, get a proper education in Hyderabad.

The ACP trains Ranga and sends him back to Billa's gang as a person who has lost his memory. Slowly Ranga starts to learn about Billa's gang and even speaks to Devil, Billa's boss, on the phone. Ranga provides a pen drive with the secret information of the crime network to the ACP, but he is about to be killed by a woman named Maya because her brother Vikram as well as his fiancée Priya were killed by Billa. At this juncture, the ACP arrives and tells her that he is Ranga and not Billa. Since then, she begins to assist Ranga and the ACP in their mission and soon falls in love with Ranga. Later before a party, Ranga secretly provides information to the ACP about a meeting of Billa's network and Lisa, Billa's girlfriend, overhears his conversation. She challenges Ranga but in the fight, he accidentally kills her. A shootout occurs at the party and the ACP is secretly killed by Devil, leaving his gun behind. Ranga finds the ACP's body and the gun, but is taken into the custody of the police team, now headed by Interpol Officer Dharmendra. He argues during interrogation that he is Ranga and not Billa to Dharmendra. Ranga mentions a piece of evidence – the pen drive which may prove his innocence but the pen drive is nowhere to be found.

Unable to prove his innocence, he escapes from a police van. He phones Dharmendra and ask him to meet at the Aero bridge. Here it is revealed that Dharmendra is none other than the Underworld Crime Don Devil and he is the one who killed ACP Krishnamoorthy. While escaping from Devil's gang, he meets Officer Adithya, who apparently had the pen drive all along and strikes a deal with Ranga to get hold of Devil. Meanwhile, Maya has been kidnapped by Devil after she tried to defend Ranga from Devil. Maya is tied up and kept in a car with her mouth taped shut. Ranga decides to pose as Billa to Devil, and provides Russian explosives to an arms dealer Rashid, who insisted on dealing with Billa. Enraged at being slighted by Rashid, following the completion of the deal, Devil and his henchman Ranjith fight with Ranga. Soon the police arrive and Devil, posing as Dharmendra, asks the police to arrest Ranga as Billa but gets shot by the squad of police and dies as the police have wired the entire conversation between Devil and Ranga, thus proving Ranga's innocence.

The movie ends with Ranga returning to Visakhapatnam with Maya, and deciding to start a school and college there with the government reward given to him and four suitcases of cash he stole from Malaysia.

The Below is Based on an interview by Meher Ramesh to Mr. Jeevi of idlebrain.com.

It was during the shooting of Vayassunami song for Kantri in Ramoji Film City, NTR asked me if I were interested watching Tamil Billa film. He got a print mailed from Chennai. He wanted to watch it because it was done by legend NTR as 'Yugandhar'. He said that if we like the movie, we might remake in Telugu immediately after Kantri film. I loved the film, but opined that NTR might not suit the role at this stage of his career and told him frankly about it.

I got an offer to work with Prabhas. I told him another story and he didn't look excited enough. I casually asked him if he saw Billa. I told him that it has all elements of commercial hits like Rowdy Alludu and Donga Mogudu which Chiranjeevi has done in his peak time of the career. He loved it and I told him the script changes. We need a comfortable producer who can spend lot of money at the same time who doesn't pressurize us. Prabhas suggested that we should make it on his home banner Gopi Krishna Movies. I told him another script which is equally exciting. It would cost only 60% of what Billa would have cost. But Prabhas wanted to make Billa. We narrated it to Krishnam Raju and he loved it. I wanted Krishnam Raju to do the role of police commissioner. I wanted to capture the first combination of Prabhas and Krishnam Raju.

I did some changes in screenplay. I made Billa an out and out commercial entertainer. I visualized every shot before making the movie. We went to Malaysia and selected the required locations a month in advance.[4]

Meher Ramesh explained his casting decisions in an interview.

Anushka: I knew Sweety (Anushka Shetty) even before she entered movies. It was me who introduced her to Puri Jagannadh for Super. I told her that she is going to be paired up with Prabhas and I need her in best shape. She worked hard and when I met her after two months, she slimmed down a lot.

Hansika: I told Hansika Motwani that a slot done by Kareena Kapoor in Don is available and asked her if she is interested in doing that role. She trusted me and told yes immediately.

Namitha: I didn't have Namitha in my mind for that character. I tried many new faces. Namitha asked me that she want to re-enter Telugu films with Billa. She slimmed down for this role and we had a photo shoot before signing her.

Supreet: Supreet is highly impressive as Katraju in Chhatrapati. He matched the masculinity of Prabhas in that film. I cast him as an associate of Prabhas in this film. He looks cool in black suits.

Rahman: Tamil actor Rahman did an important role as an associate of Krishnam Raju in this film. I noticed that he is also a perfectionist like Prakash Raj. He learnt each and every word of his dialogue before hand. He uttered all Telugu dialogues with no prompting.[4]

Most of the Indian and Bollywood films shot in Malaysia has William Wong as action director. But I have good tuning with Stun Siva. I employed Stun Siva as fight master for Billa and we took the help of William Wong whenever we required. We shot a chase that never came in Indian screen before. It will be like watching terrific chases in Bond flicks. We used choppers for 15 days. When we asked for 2 helicopters, producer granted us four. This credit should go to producer D Narendra and production designer Krishna. We stayed in Malaysia for 3 months at a stretch to shoot this movie.

I wanted to have either Sameer Reddy or Chota K Naidu for cinematography. But dates of both of them were not available. Not many people know about Soundar Rajan who worked as an associate to KV Anand in the past. He also worked for four forgettable Tamil flicks. He got busy in doing commercial ads. We wanted to shoot Billa with Super 35 camera. When I met him for the first time, we shared good vibes. We spoke for 5 hours about moviemaking. I signed him without looking at his work because I realized that he is extremely talented through our discussion. He is a friend of Vishnu Vardhan who directed Tamil Billa. We met Vishnu Vardhan and I informed him the changes I made in Billa script. He was impressed with it. Soundar is an excellent technician with amazing sense of using lenses. He is one of the reasons why Billa is made in less time with more quality.

Billa is shot in 104 working days. We shot this film in unpredictable weather of Malaysia. The total runtime of the final cut is 2 hours and 30 minutes.[4] 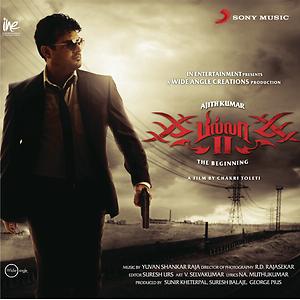 Music of Billa was launched at a packed auditorium in Shilpakala Vedika on the night of 18 March 2009 with Dasari Narayana Rao, S. S. Rajamouli, V. V. Vinayak, Gopichand and Allu Arjun as guests. Dasari Narayana Rao launched the music. Mani Sharma composed music for the film and Lahari music bought audio rights.[5] The song 'My Name is Billa' was re-used by Sharma for the Tamil film Sura (2010) as 'Naan Nadanthaal Adhiradi' and 'Bommali ' as 'Thanjavoor Jillakkaari'.[6]