If someone, a year ago, nay, even three months ago, would have told me that I would be playing a 3D, Grand Theft Auto-style game with a lively, large sandbox map, on my phone, I would have told them they were crazy. Yet, that is what the folks at Gameloft have delivered in Gangstar. Though the game has its flaws, they don't diminish the impressiveness of this epic game.

Gangstar West Coast Hustle HD is released by Gameloft inc. Like all other games of gameloft inc. It is also a beautiful game. HD graphics interfaces are included in this game. There are many different objectives and stages in Gangstar West Coast Hustle HD game. Also a number of places are used in this game. I have liked this game. Move to the West Coast and immerse yourself in L.A. Gang life with the new Gangstar. Explore more realistic environments than ever for a unique gameplay experience. Complete 50 different missions that combine the best of action games and driving games. This game is similar to the GTA series games.

Gangstar starts off with a bang. In the opening sequence, the protagonists (or possibly antagonists depending on your point of view), Juanito and P. Thug, pull off a major bank heist complete with a following high-speed chase. After evading the cops, the actual game picks up with the two lead characters seeking help from L.C., the friendly neighborhood gangster. The game continues like this, with you receiving various missions from various gangsters and becoming more and more intertwined with the city gangs. The story evolves, but is decidedly mediocre, but who cares, you can jack cars and shoot hookers! Just like GTA, the main gameplay mechanics are shooting people, jacking cars, and driving. The game is pretty linear, with only a few side missions and deviations, but then again, you can always just go shoot random people for the fun of it. Missions are familiar - kill people, follow people (but eventually kill them), street races, and delivering things are the bulk of your tasks. Missions are relatively short, and the game saves after each completed mission, making Gangster more ideal for short pick up and play sessions than other similarly vast games. There are no real genre innovations, everything is recycled from GTA, but that works just fine in this game. As in GTA, your wanted meter increases when you pile up felonies, but in a major flaw of the game, it doesn't really matter. Sure, cop cars will come after you, but there are no SWAT teams or helicopters, and either mowing down the cops with even a mid-level weapon or collected one of a bevy of 'badges' scattered across the city to erase your wanted level is simply too easy. Speaking of weapons, they can be purchased in two ways. First, by tapping the well-placed in game mini map, which will also display large map of the entire game, you can purchase weapons and ammo on the go, for a small shipping fee of course. To get the best weapons, though, you have to go straight to the source... one of a few gun shops on the map. There are also a few car repair shops where you can take your nearly trashed rides and restore them to as good as new status. As you can tell, there's plenty to do in Gangstar, and the entire saga will last you a good 5-6 hours, not counting all the fun you can have creating mayhem after you complete the story, or, for perfectionists, the time it takes to rack up all the in-game achievements. 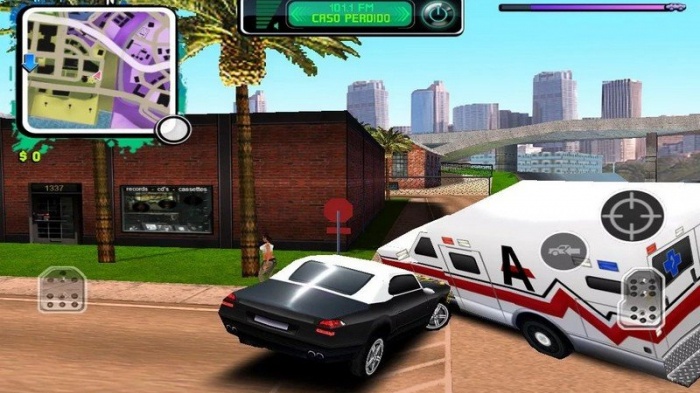 Surprisingly, even with a multitude of controls, it all work pretty well. There is a virtual joystick for running and this works incredibly well, partially due to the fact that after the initial touching of the joystick, the sensitivity area for movement seems to extend to almost the entire screen. The in-game camera automatically adjusts throughout the game, but there are times where it won't quite change fast enough, so thankfully you can swipe anywhere on the screen to change the camera angle. Unfortunately though, there's no way to zoom out. To make this game work, Gameloft had to get the combat controls right, and thankfully, they did. Tapping on an enemy locks on to that target, and then you can press a virtual button to fire your weapon. Jacking a car is even simpler - after approaching a car, a virtual button will appear, and tapping it will summon a brief animation sequence in which you steal the car. Three options are offered for car steering: accelerometer, the default, which felt way too loose, a virtual steering wheel, and my favorite, a steering slider. To accelerate, you are given the option of either virtual gas and brake pedals or another slider. I found the two slider combination to be most effective, but as is common on the iPhone platform, there was still much accuracy to be desired. Luckily, collision detection does not extend to many background objects, such as street lights, though it can be hard to tell which objects you can pass through and which you will run into. 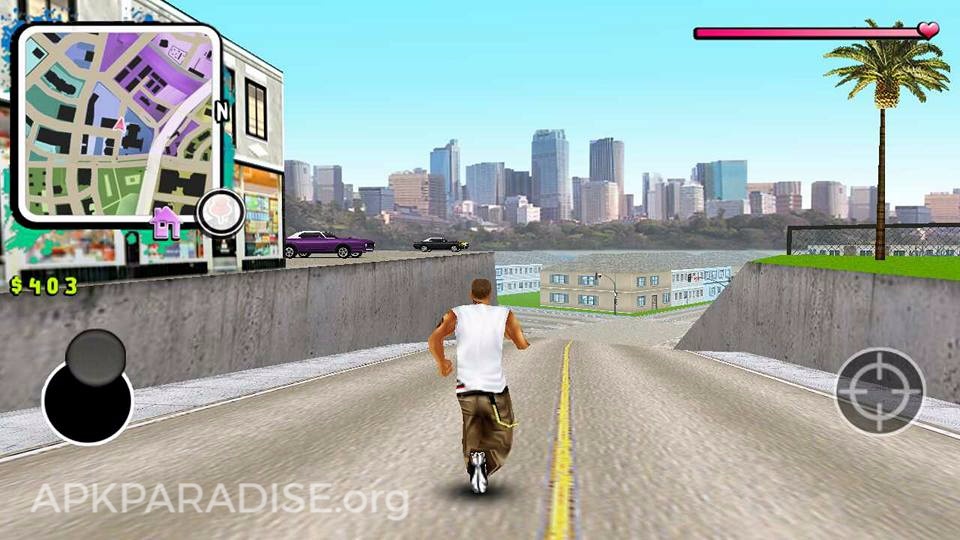 The graphics are among the most impressive seen on the iPhone platform. The rich, detailed 3D world, while not as huge as the maps found in the modern GTA series, is still expansive, and textures are almost all well-detailed, though some look blocky close up. These memory intensive graphics come with some side effects, however. The draw distance is not very good, though this is easily forgivable, and the game takes forever to load initially. After that, however, there are no loading times, and surprisingly enough, the lag on my iPhone 3G was negligible. Audio is also quite good. Though the voice acting is sometimes over-the-top, all other sound effects are nice. While in a car, you can choose from a variety of radio stations, each broadcasting a different music genre. You can also create your own playlist via the 3.0 in-app iPod library access feature.

Despite a few shortcomings, Gangstar is a truly amazing game that really shows off the capabilities of the iPhone as a serious gaming platform. $6.99 is an absurdly low price to pay for Gameloft's epic masterpiece.