In what was another mark of #PinoyPride, netizens went crazy when the beloved minions from Despicable Me 2 spoke in their gibberish language in a viral video, and Filipinos assumed they were speaking in Filipino. According to netizens, they said things like “narito na” (it’s here) and “ikot” (turn). Heck, the minions made no sense that everyone around the globe claimed that it was speaking their language.

But right around the viral video came out, John Cohen, Despicable Me 2’s producer, confirmed that they do speak Filipino. Sort of. According to him, “Minions use a bit of Spanish, English, French, Greek, Korean, Japanese, and even Filipino. You hear all kinds of languages being incorporated into the way they speak.”

Next year, the minions are finally getting their own movie. And guess what? They do speak Filipino. Clearly. In the trailer released today, one minion shouted to his friends, “Tara, tropa!” (Come, friends). If minions all had nationalities, this particular minion is surely Filipino. He calls everyone tropa (friend), and believes that the best way to do things is by group. He was probably calling his barkada (group of friends).

The minions serving their first boss: a t-rex

Kevin, Stuart, and Bob take it upon themselves to find a new boss for their minion brothers 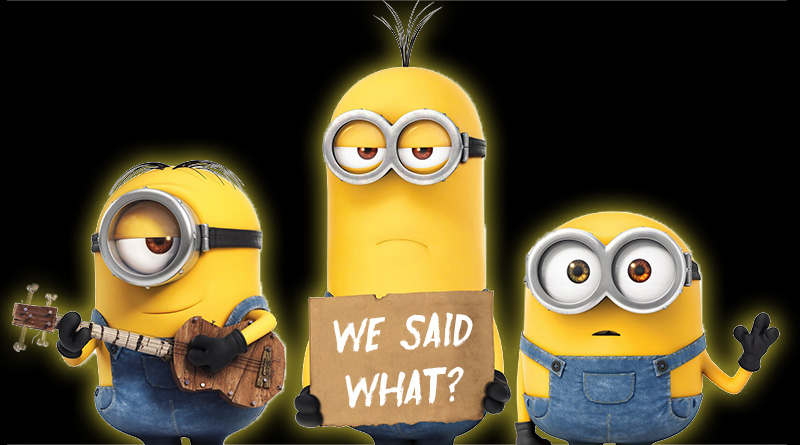 The movie, aptly titled Minions, will follow their evolution, from single-celled (yellow) organisms to complex creatures that appreciate the bond of brotherhood. Their goal is to serve the most despicable master around, from a large t-rex to Napoleon Bonaparte and Count Dracula. As their masters die off, they must find a new one to serve. Enter Kevin, Stuart, and Bob, who take it upon themselves to find the most evil boss his brothers could follow.

The new movie will be voiced by Sandra Bullock, Jon Hamm, Michael Keaton, Allison Janney, and Steve Coogan. The movie will be screened in the Philippines in July 2015.

Watch the full trailer below!

Are you excited to see the movie? Share your thoughts in the comments section below!