Karuppasamy, literally known as The Dark God, is a fierce-looking deity sporting a thick moustache, decked with many ornaments, riding a white horse and carrying a drawn-out sword.

He is said to have sprung from Vishnu’s hands and hence is also known as Kaiyannar (One created from the hand). Though, he has been around from time immemorial, he is hardly known in the Vedic Hindu Pantheon, and is popular as a village deity.

In fact, Karuppaswamy is a Universal God known to different ancient civilizations and called by various names.

In the ancient Tamil society, people venerated the Veerargal (or warriors) and had the formless stones (Veera Kal or Veerakkal) or Nadukkal erected in memory of them. These fallen warriors or any persons who sacrificed their life for a good cause such as protection of the welfare of the society or the community are revered by all. Just like other sub-deities, he is also a martyr. 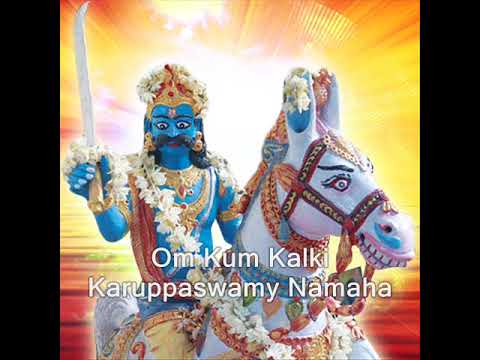 The Karuppanar Kovil (or a shrine) is always found in the outskirts of the village. The maintenance of the temple is taken care of by the whole of the village. His temple is usually in the open space and will not have traditional Gopurams like any other temples. You can see big statues of Gods with weapons like bow and arrow, swords, knives and other protective weapons alongside Karuppusamy.

There will also be statues of other Goddesses (7 Kannimaar or the 7 Virgins)called as saptha Kannimar in his temples. Animals, often signifying his pets – a dog (Vettai Naai or a hunting dog), a lion and his ride – the white Horse are also found.

Statues of Karuppusamy are often black in colour and adorned with chains. He will usually be holding a sword, sometimes with bells attached. Often, as part of his worship, a cigar will be lit and placed in the Deity’s mouth. He is also offered alcohol. He sports long hair that is tied sidewards on the head and has a thick mustache. His eyes are wide and bright, and the forehead is smeared with thiruneeru (sacred ash) and kumkum paste.

Karuppusamy is often worshipped alongside Madurai Veeran and Muneeswarar. The most famous temple for Karuppasamy is located at Azhaghar Koil, near Madurai. This is considered as the most important of the Karappannaswamy temples. Here he is worshipped as Pathinettampadi Raja Karuppannaswamy. There is no idol here. Only an Aruval at the top of eighteen steps. hence the name Pathinettampadi.

The worship pattern is non-Vedic or non-Agamic through Folk tales, Folk songs and Folk arts (Villu pattu, Karagam, Koothhu, etc.). The local priest might offer flowers or Vibhuti (holy ash) or Holy flowers to the worshippers and may play the role of an oracle for Shamanism.

Various persons within the clan system are identified to play to the role of oracle on annual turn basis. They undertake vradham and maintain chastity and purity during the period of vradham. During the festivals, oracles get into trance state (Saami aadudhal) and deliver counselling messages to the group assembled there without bias.

The normal problems addressed are family problems, financial troubles and local community and social issues for resolving within the community group with the agreement of local ancestral god through oracle.

Whenever the wishes of the people are granted, they give their offerings to Him based on what they vowed to offer. There are rigidly no rules as to what a devotee can offer. The most common offerings include milk, camphor, rice, butter, cloves, ghee, cheroots, and alcohol. As mentioned earlier, animals like goats, pigs, and chicken are also sacrificed.

God Karuppaswamy is worshipped in various forms, and different names are being given to him based on it. Apart from the difference in the weapons and the way Karuppaswamy stands or sits, there are not many differences in these forms.

It is believed there are 108 forms of god Karuppaswamy. Of those 108 forms, here are some of the popular ones.

Karuppaswamy is a primordial God with tremendous amount of wisdom and energy. He is also called as The Dark God in reference to his role in driving away the dark forces of evil, falsehood and treachery

Within the Hindu tradition, he embodies the combined power of Kala Bhairava, Narasimha, Veerabhadra and Rudra.

Karuppaswamy is the God of Righteousness, who upholds ‘Dharma’ or Right Action. He embodies the energy to carry out prayers in a relatively short period of time, and in some cases, almost immediately. He has the ability to bring desired results very fast. His speed comes from the horse he gallops upon. As per Dr. Pillai, the horse is a powerful representation of the divine and has the ability to not only store one’s prayers, but also transmit divine vibrations.

Karuppaswamy can remove the pain and suffering of people, and establish a new divine world order of truth and righteousness. He represents the ability to manifest and produce fast results.

Dr. Pillai has also observed that the fastest and easiest way to connect to this archetype is by feeding the poor and hungry.

Parallels between Kalki Avatar and Karuppasamy

The Kalki archetype, or Avatar is said to be the tenth incarnation of Lord Vishnu. He is said to come to end the present age of darkness and destruction, he is the god who leads us through this transition to the Golden age.

The name ‘Kalki’ is metaphorically linked to eternity or time. The origins of the name bring in the meaning ‘Destroyer of Foulness,’ ‘Destroyer of Confusion’, ‘Destroyer of darkness’ or ‘Annihilator of ignorance’.

The representation of justice and righteousness is very similar to that of Karuppasamy. Destroying evil, bringing in justice, the Bhagavata Purana states, “Lord Kalki, the Lord of the Universe, will mount his swift white horse Devadatta and sword in hand travel the earth exhibiting his eight mystic opulence’s, destroying all evil,”- the roles of both the deities are similar and parallel to one another.

Both these archetypes represent the path towards destroying the old negative habitual patterns towards the path of a new era. They are the guiding lights of transition from this age to the new Golden Age. 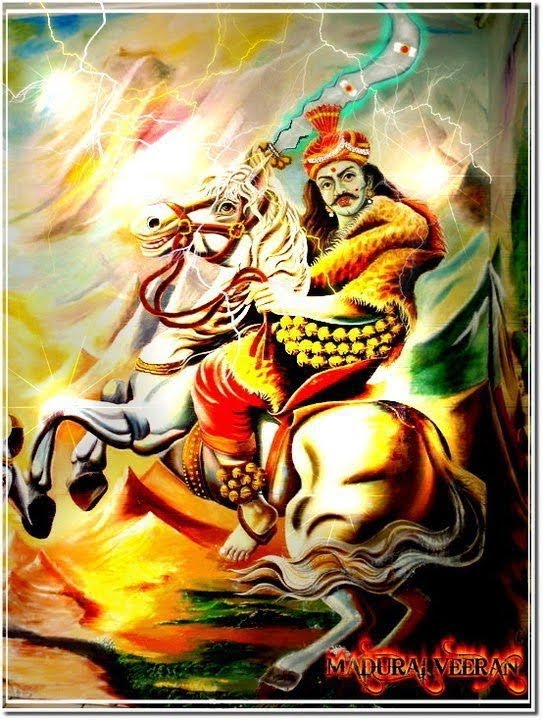 Chant the Mantra (Quantum Sound Frequency) given by Dr. Pillai to invoke Karrupasamy’s blessings and grace in your life.

Get a Shiva-Shakti mala, made from rudraksha/crystal beads, and chant this frequency 108 times daily.