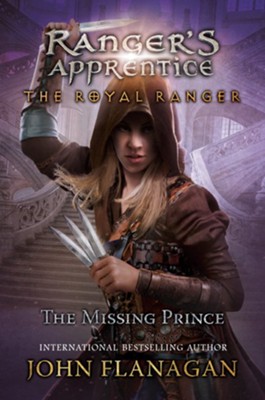 Will Treaty has come a long way from the small boy with dreams of knighthood. Life had other plans for him, and as an apprentice Ranger under Halt, he grew into a legend—the finest Ranger the kingdom has ever known. Yet Will is facing a tragic battle that has left him grim and alone.

They were coming closer to Maddie’s hiding place.

There were a dozen of them, spread out in a long cordon, five meters apart and covering sixty meters of territory. Each one carried a flaming torch, holding it high to dispel the gathering gloom of twilight. She was approaching the line of searchers head-on. If she could break through the line, or simply remain unseen while they passed her, she would be free and clear.

Actually, “hiding place” was something of an overstatement for Maddie’s position. She was simply lying prone, covered from head to toe by her cloak, among knee-high, dried stalks of grass.

In the fields on either side of the one she had selected to hide in, the grass grew waist high, waving gently in the early evening breeze. It would have provided better concealment from the dozen men searching for her. But she had chosen the shorter grass for a reason.

Picking up where The Royal Ranger: A New Beginning left off, this next installment continues the story arc featuring young apprentice, Maddie, and the student-turned-master, Will Treaty. The time has come for the next generation to assume the mantle and become protectors of the kingdom of Araluen.

After passing her third-year assessment as a ranger’s apprentice, Maddie is called home to Castle Araluen. Forced to keep her ranger training a secret, Maddie feels trapped by the monotony of castle life and longs to find a way out. But there are whisperings of a new threat to the kingdom. The mysterious Red Fox Clan, a group of anarchists all donning fox masks, have threatened Castle Araluen and question Princess Cassandra and Madelyn’s succession to the throne. Will they succeed in unseating Cassandra and Madelyn and take the throne for themselves?

Bestselling author of the Ranger’s Apprentice and Brotherband series, John Flanagan returns in the captivating follow-up to The Royal Ranger: A New Beginning. Perfect for fans of Tolkien, Redwall, and Game of Thrones!

When you’re a Ranger who happens to be royalty, stopping treason isn’t just part of the job – it’s personal.

Most of the time, Maddie is an apprentice Ranger, learning archery, knife throwing, unseen movement and combat skills under the guidance of the legendary Will Treaty. For one month each year, though, she must return home and resume her identity as Princess Madelyn.

Forced to keep her Ranger training a secret, Maddie finds castle life dull. But when she discovers clues to a devastating plot against the crown, she realises her family – and the peace they’ve worked so hard to achieve – could be in terrible danger.

To save everyone at Castle Araluen, and her father’s forces who are trapped by an enemy army in the north, Maddie must find out the truth. Who is the man in the red fox mask?