The Macc Lads are an English punk band from Macclesfield, Cheshire, England.[1] Self-proclaimed the 'rudest, crudest, lewdest, drunkest band in Christendom',[2] the Macc Lads used irreverent, foul-mouthed and politically incorrect lyrics; common lyrical themes were binge drinking, sex and fighting.[3] Active from 1981 to 1995 and reforming in 2018, the band now tend to be regarded more favourably by music historians, in contrast to the reaction the band generated in their heyday, with many appreciating the blatant schoolboy humour and tongue-in-cheek nature of the source material.

A concert at the Birmingham Hummingbird in 1989 resulted in thousands of pounds' worth of damage by fans. Vandalism included scaffolding being pulled apart and thrown onstage as well as a broken toilet, pots of paint and ashtrays.[5] Band members McCavity and Muttley suffered cut heads and fans went on stage to fight road crew, and stage security members Lockstock and Mungo.

The Lads' website states that at a gig in Cheltenham in 1991 a 'bag of hot sick' was thrown at the band.[5]

Before reforming in 2018, the band last performed at a private show in 1997 for Muttley's local football team in Macclesfield. The line-up was the four-piece of Muttley, Winston Dread, Al O'Peesha and Johnny Mard.[7] In 1999, Stez Styx, The Beater, Muttley and Al O'Peesha reunited for an interview at the Ivy House pub, Macclesfield for The Bear's Head fan website. This was conducted by long-term Macc Lads fan and Bear's Head fansite contributor Lance Manley, also known as Liquid Goblin.[8]

On 23 June 2015 The Guardian newspaper published an article by Ian Gittins in which he put a satirical interpretation on the Macc Lads' lyrics and said that they had arrived 'too early' in music history to not be taken at face value. The article stated that they were ultimately 'a coarse yet clever spoof'.[9] Muttley McLad himself rejected this description, saying 'There was no ulterior motive, The Guardian are reading too much into it. Making us out to be witty, intelligent satirists is probably the worst thing that's ever been said about us.'[10]

In November 2015 a 5-minute documentary called Coffee, Sex & Johnny Bags by The Beater's son Joe Conning was made and published on 2 January 2016 on YouTube and social media. The video is another reunion of the original line-up with Muttley, The Beater and Stez Styx giving insights into lyrics the band wrote plus reflections on their success. Also contributing was long-term 'affiliate' Bammy the Bamster who is mentioned in a couple of the band's songs.[11]

On 25 February 2017, the Macc Lads members Muttley McLad, The Beater, Stez Styx and Chorley the Hord reunited for a gig as F.I.L.F. with Bammy the Bamster on vocals. Although not an official reunion of the Macc Lads, this was the first time in since 1988 that Muttley, Chorley and Beater have played in the same band and the first time that Chorley and Stez have shared a stage.F.I.L.F. are an ongoing project aiming to cover classic punk music, and began closing performances with Macc Lads material at Blackpool's Rebellion Festival. A gig at No.5 Bar in Macclesfield on 10 February 2018 sold out in three days.

On 1 July 2018 Lance Manley published a memoir of his time following the Macc Lads. Entitled Beer, Sweat & Blood: On Tour With The Macc Lads, the book covers the period 1988 to 1999 and the recent reunion.[12]

On 3 August 2018, the Macc Lads reformed to play the Rebellion Festival in Blackpool. The line-up was the same as F.I.L.F. with Bammy on vocals. Two months later Muttley resumed lead vocals, and Bammy stepped aside to become the band's full-time manager. A sell-out tour entitled The Usual Subjects took place in November 2018 with all of the gigs sold out.[13]

On 16 November 2019 Lance Manley published a follow-up book entitled From The Cradle To The Gravy: Fan Tales Of The Macc Lads which features short stories and tales from other fans and associates of the band over the years.[14]

On 14 December 2019 the band released their first original material since 2006. A vinyl 7-inch single with the tracks Mary, Queen of Pox and Middle Finger was given away free to all fans attending the final gig of 2019, at the Engine Shed in Lincoln.

In 2020 the Macc Lads began selling their own range of Covid-19 surgical masks,[15] featuring a cartoon of a stubbly chin and a mouth holding a lit cigarette. They also released 5 new songs via their website. They are Devil's Handcart, Best Barbershop, Black Latrine, Sunniside Nursing Home and Curley Clare. There is a video for Curly Clare featuring Muttley and the Beater.[16]

In December 2020 the Macc Lads published a Ladvent calendar on their website. This featured a 1-minute track entitled 'Let's Get Pissed Again' which was originally features on the 1982 release 'Minge Pies & Mistletoe'. Its lyrics have been changed to reflect the lockdown over Covid-19.

The only member to be with the band throughout their career is Muttley McLad, real name Tristan O'Neill, who performed vocals, bass, and wrote lyrics. Other band members included:

This is an approximate timeline of the members of the Macc Lads. 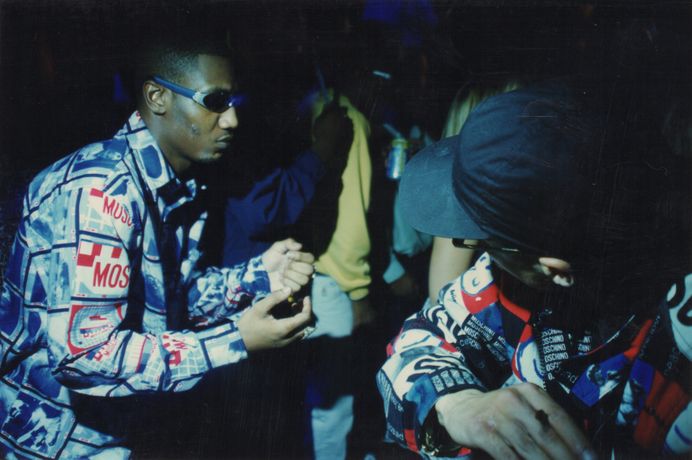